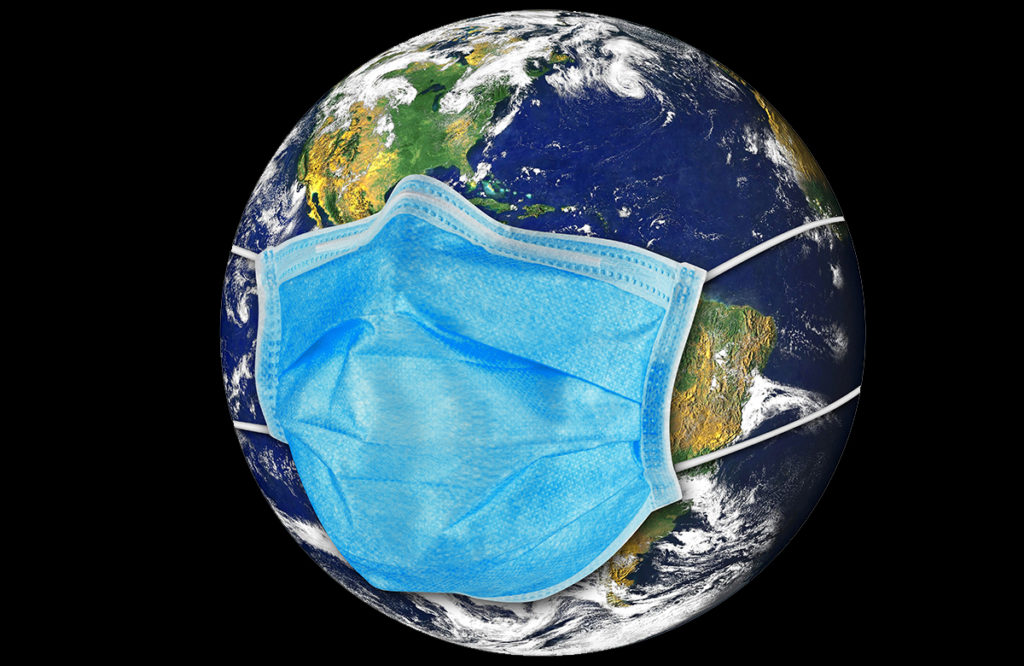 More than ten years ago, I published an article entitled Global Breathing. It discusses a social history of breathing techniques in spiritual practices in India and China, such Yoga and Qi Gong. Hindu, Daoist, and Buddhist traditions regard control over breathing not only as essential for living, but also for spiritual growth. It is an idea that is also shared in some Islamic and Christian traditions. The article explores both the nationalization and the globalization of these techniques that have reached audiences far beyond India and China. Today, we see the globalization of a virus that attacks our ability to breathe. No spiritual technique is available to keep control over our breathing. One has to trust mechanical devices to take over our breathing while fighting the virus. 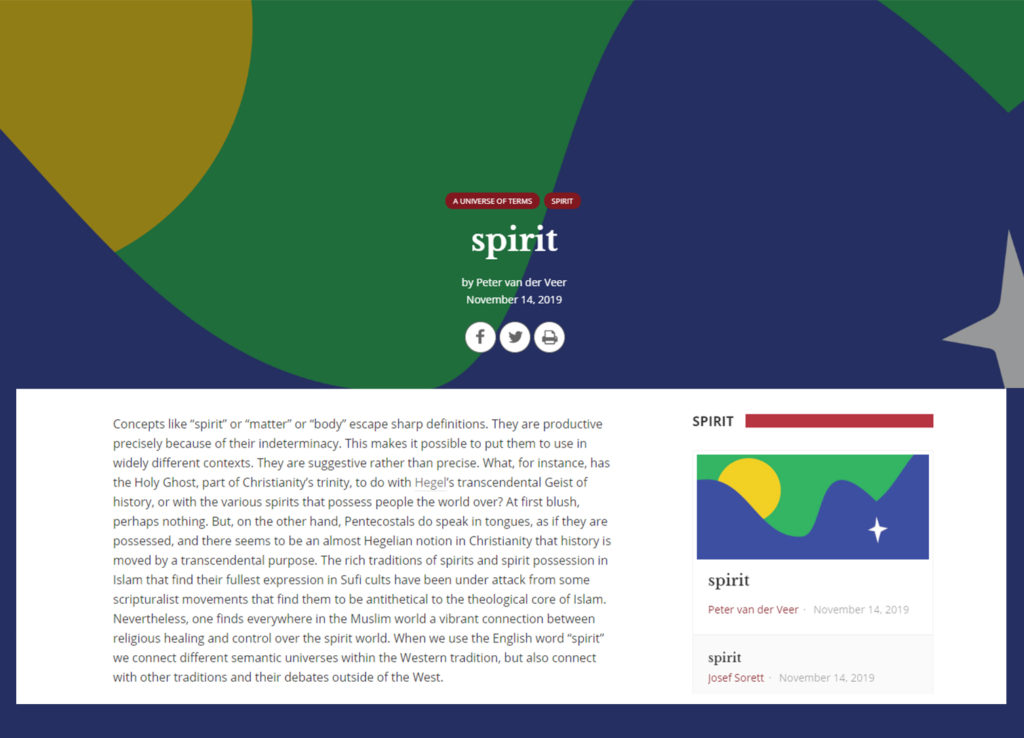 Concepts like “spirit” or “matter” or “body” escape sharp definitions. They are productive precisely because of their indeterminacy. This makes it possible to put them to use in widely different contexts. They are suggestive rather than precise. What, for instance, has the Holy Ghost, part of Christianity’s trinity, to do with Hegel’s transcendental Geist of history, or with the various spirits that possess people the world over? At first blush, perhaps nothing. But, on the other hand, Pentecostals do speak in tongues, as if they are possessed, and there seems to be an almost Hegelian notion in Christianity that history is moved by a transcendental purpose. The rich traditions of spirits and spirit possession in Islam that find their fullest expression in Sufi cults have been under attack from some scripturalist movements that find them to be antithetical to the theological core of Islam. Nevertheless, one finds everywhere in the Muslim world a vibrant connection between religious healing and control over the spirit world. When we use the English word “spirit” we connect different semantic universes within the Western tradition, but also connect with other traditions and their debates outside of the West. 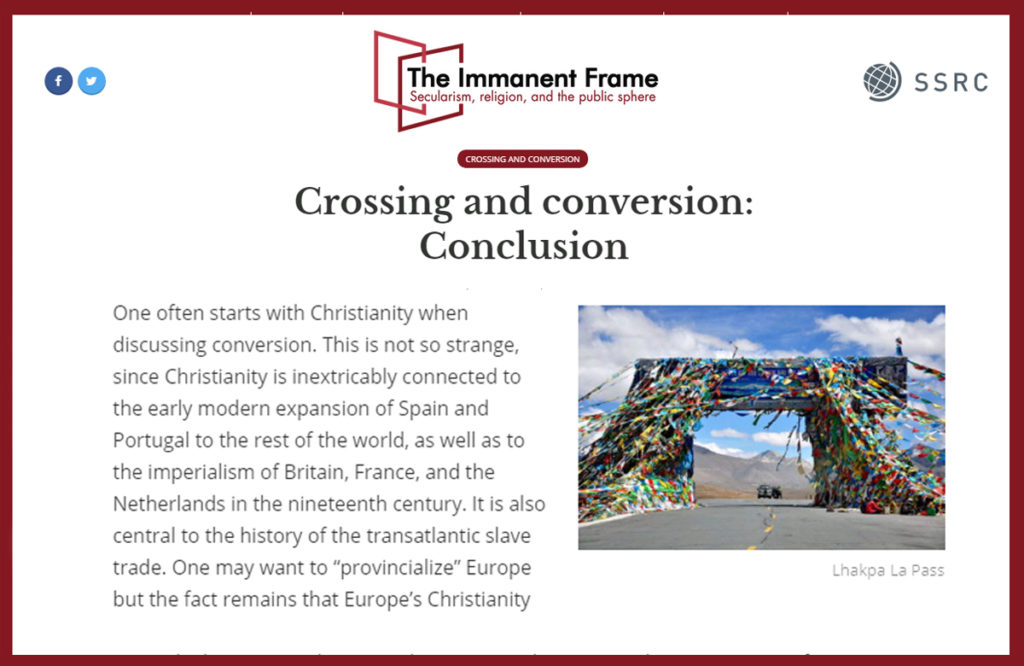 One often starts with Christianity when discussing conversion. This is not so strange, since Christianity is inextricably connected to the early modern expansion of Spain and Portugal to the rest of the world, as well as to the imperialism of Britain, France, and the Netherlands in the nineteenth century. It is also central to the history of the transatlantic slave trade. One may want to “provincialize” Europe but the fact remains that Europe’s Christianity has played an oversized role in creating world-historical conditions of modernity, although certainly divergent pathways and interactions have created a great variety of conversions to multiple modernities. This is always a history of power, but never a simple one, since conversion under conditions of enslavement or colonial rule gives access to literacy and education, tools for mobilization against oppressors. 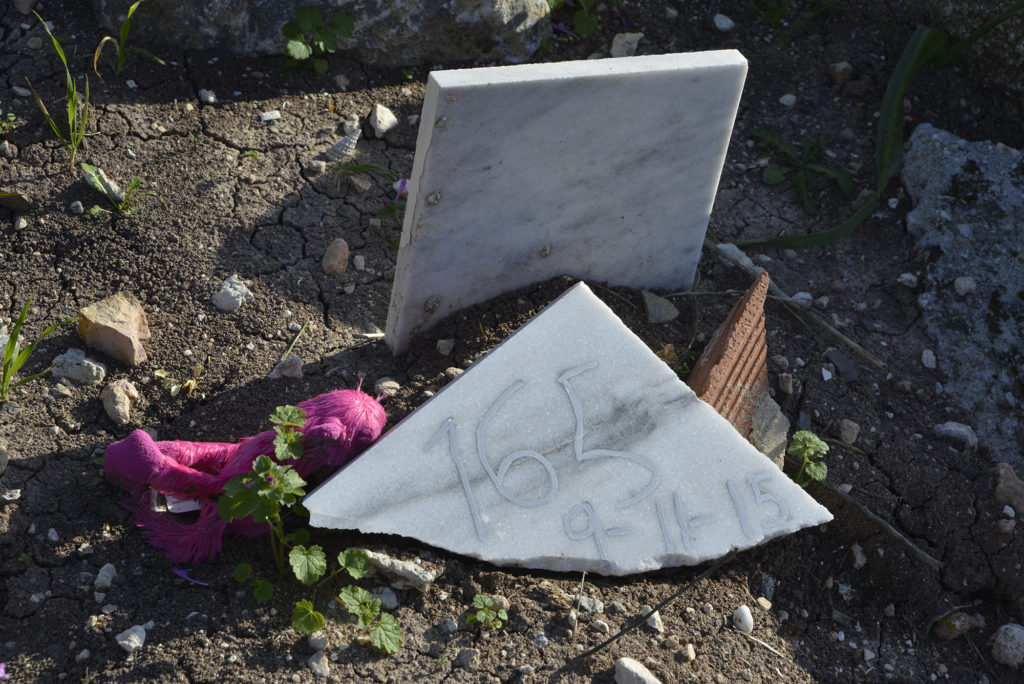 The Dead and the Living

Jesus said ‘Let the dead bury the dead’ (Luke 9:60). But, obviously, they cannot. They need the living to do it for them. What strikes the reader of the overwhelming historical and anthropological literature on death and the disposal of the dead is the deep concern that most societies have in taking care of the bodies of the dead. In his monumental book on The Work of the Dead (Princeton 2015) the historian Thomas Laqueur takes as his starting point an anecdote about the Greek Cynic philosopher Diogenes who supposedly has said that when he died his body should be tossed over the city walls for beasts to scavenge. Why should he or anyone else care what became of his corpse? In his research on mainly Europe’s cultural history from the Greeks till today Laqueur shows that almost everyone at any point of history does care. 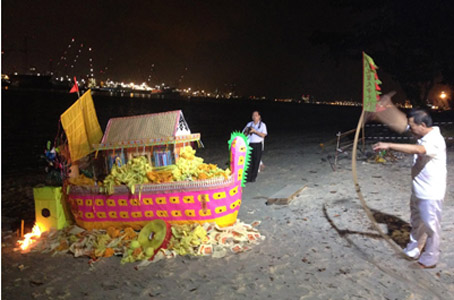 Singapore today is a product of inimitable urban planning and social engineering. What has been achieved under the one-party dominance of the PAP (People’s Action Party) under the leadership of Prime Minister Lee Kuan-Yew and his son is in many ways admirable. Since its formation in 1963 Singapore has developed into one of the ten richest countries in the world. It has been spared much of the social unrest that besets its neighbors, Indonesia, Malaysia, and Thailand. Through a well-conceived master plan, public housing has been distributed on an ethnic-quota basis that has prevented ghetto formation. Since the 1960s, the entire urban space has been reorganized by destroying the old kampongs and placing people in the new Housing Development Blocks. 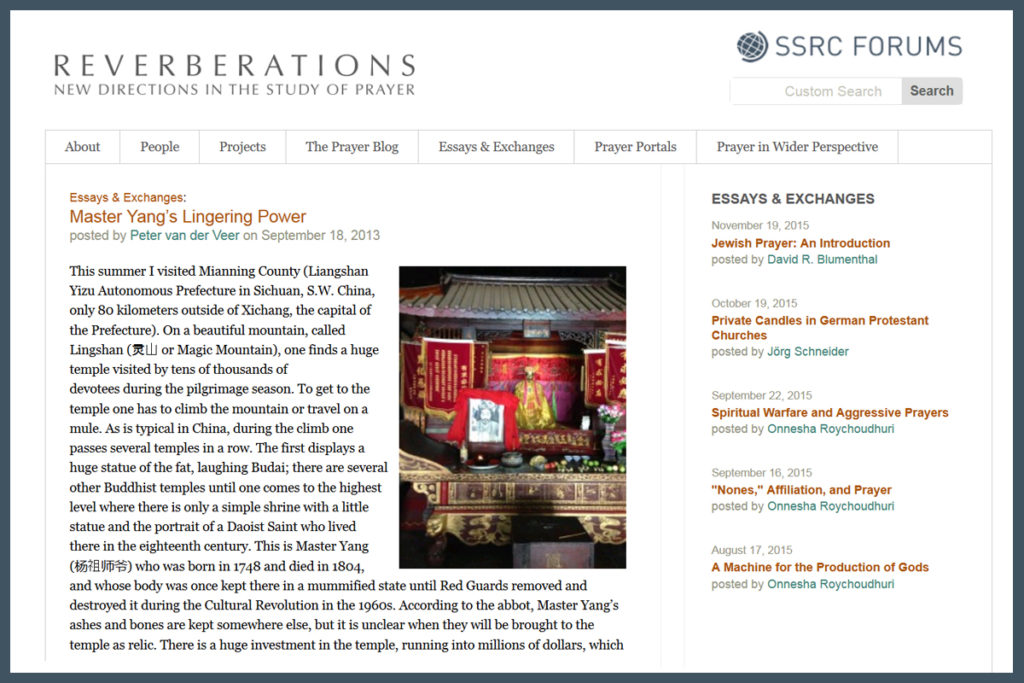 This summer I visited Mianning County (Liangshan Yizu Autonomous Prefecture in Sichuan, S.W. China, only 80 kilometers outside of Xichang, the capital of the Prefecture). On a beautiful mountain, called Lingshan (灵山 or Magic Mountain), one finds a huge temple visited by tens of thousands of devotees during the pilgrimage season. To get to the temple one has to climb the mountain or travel on a mule. 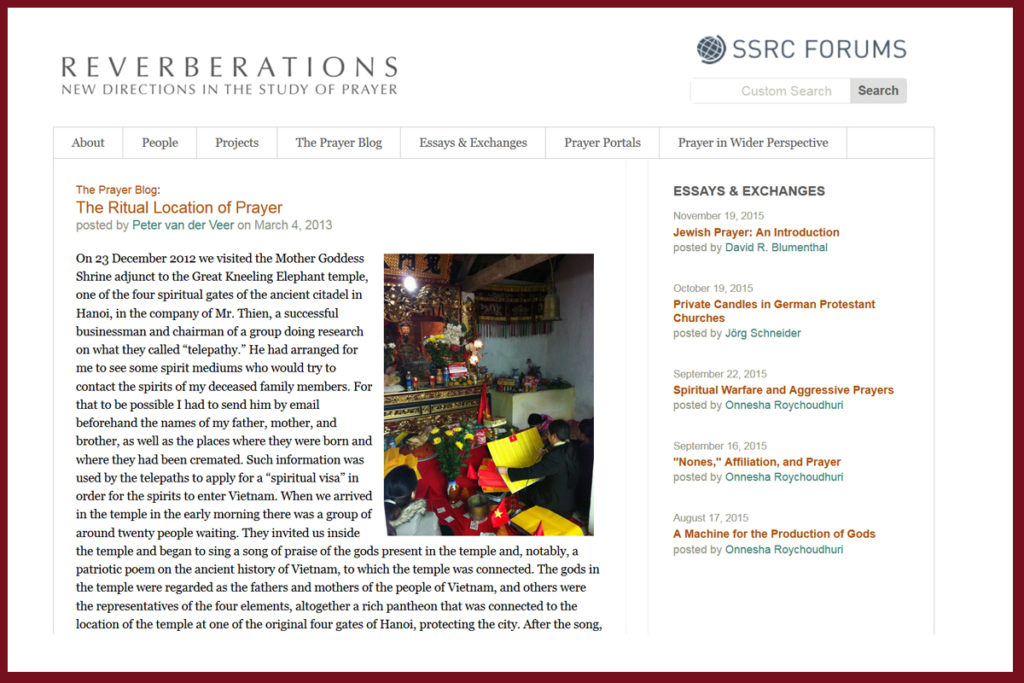 The Prayer Blog: The Ritual Location of Prayer

On 23 December 2012 we visited the Mother Goddess Shrine adjunct to the Great Kneeling Elephant temple, one of the four spiritual gates of the ancient citadel in Hanoi, in the company of Mr. Thien, a successful businessman and chairman of a group doing research on what they called “telepathy.” He had arranged for me to see some spirit mediums who would try to contact the spirits of my deceased family members. For that to be possible I had to send him by email beforehand the names of my father, mother, and brother, as well as the places where they were born and where they had been cremated. 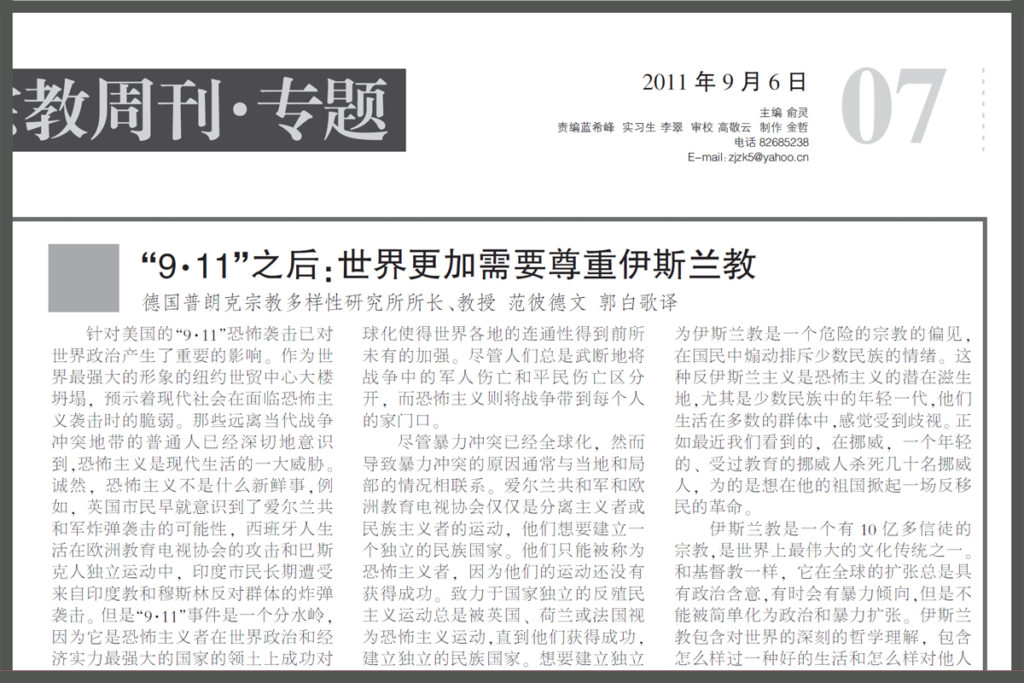 The 9/11 attack on the USA has had a huge impact on world politics. The collapse of the twin towers of the World Trade Center in New York remains one of the most powerful images signifying the vulnerability of modern societies for terrorist attacks. Common people who live their everyday life far away from the battle fields of contemporary conflict have become deeply aware of the fact that terrorism is one of the risks of modern life. Surely, terrorism is nothing new and citizens of Britain, for example, had been long aware of the possibility of bomb attacks by the Irish Republican Army, just as citizens of Spain had been living with attacks by the ETA, the Basque Independence Movement, or as citizens of India had been suffering from the bombings by Hindu and Muslim antagonistic groups.

Max Planck Institute for the Study of Religious and Ethnic Diversity